Until 2017 in which Fritz Waßmer launched 3 new single-vineyard wines from the excellent 2015 vintage, this was for 4 years the house’s much sought-after top wine. Fritz Waßmer had simply acknowledged that the best grapes would not necessarily spend the longest time in new casks and in connection with the 2011 harvest he decided to “steal” some of the fruit from some of the oldest vines at Staufener Schlossberg and Roter Berg at Kenzingen to produce an extra full Spätburgunder. The wine was subsequently named CCL, and if you were unsure where to place it in the hierarchy, you only had to distinguish the price when the first vintage was released in spring 2014. CCL is also the first 3 letters of the Latin term “Caelestino Cum Largitate “, which is best translated into “heavenly and overwhelming “. 2013 is not the most generous vintage in Baden where due to late flowering the vintage was constantly lagging behind. Weather conditions worsened and too much rain set in mid September. A careful sorting both during and after the harvest with losses of up to 20% of the grapes therefore became the sad reality. The grapes are naturally harvested by hand and driven down to the winery in small plastic boxes where all stalks are removed before the grapes are crushed and spontaneously fermented in just 2 new French casks. Subsequently, 14 months of aging followed in barrels before the wine was bottled without further clarification or filtration. Despite the challenges in the vineyards, Fritz Waßmer has achieved a beautiful finish with this wine which delivers an almost sumptuous fruit that interacts beautifully with the finely integrated aromas from the significant oak aging. Black cherries & strawberries which together create a refined fruity sweetness, and underneath, a fine dark bitter chocolate, a little leather and a spongy forest floor for added depth and complexity. Rich and elegant Spätburgunder, which one likes to linger in for a long time. 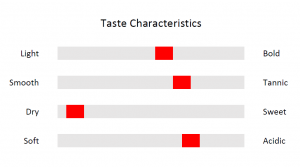